Ignorance Can Be Bliss

The headline reads “SHARK SPOTTED AT SAN FRANCISCO BEACH.” You were just there with your kids frolicking in the ocean the same day someone reported seeing a shark. Your blissful memories of the day are now clouded with the potential near miss of a shark.

But what if you’d never heard about the shark? You’d still be thinking fabulous thoughts of your day at the beach.

What if the only story you’d ever heard about an IRS audit was a good one? Your friend had an audit and she received great advice from her accountant beforehand and the whole thing was a breeze. She even found out the IRS owed her a BIG fat check.

What would be your reaction to hearing that you were going to have an audit?

Information from the media, internet, books, experts, friends, and family all make an impact on us. Some of the information sets us up to win, and…

… some scares the pants off of us.

Sometimes the stories we hear from others about how hard something is prevents us from even taking one step toward a dream.

I had never heard that starting a business was difficult while growing up. My parents just cheered me on anytime I said was going to try something new (which I did a bit too often!).

I opened my first business in my early twenties and instantly made a profit. I didn’t know anything different.

Later, my BFF Eva Gregory and I became radio show hosts on a station out of San Francisco. Again, we knew nothing about it. It sounded fun, so we did it.

We learned fast what worked and what didn’t work. We adjusted our actions accordingly. It was pretty easy and we met some of our favorite experts (many from the movie The Secret…before the secret was even thought of!).

What would be different in your life if you had never heard any negative stories? What if when you heard information, you always put it through your own process of tuning in to what parts felt true and which you’d ignore?

Now, I’m a big fan of learning and research. But again, you still have to put everything through the filter of your own intuition.

I researched BMWs before I bought my M3. I had a BMW before, and it served me very well. At that point, I had only heard positive feedback from BMW owners.

Later, I talked to several people who had many engine problems. If I had run into someone like that before I made my purchase, I may have been put off. 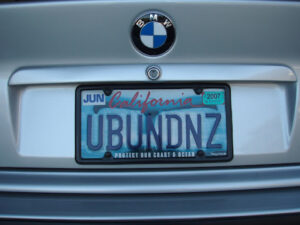 In fact, this particular purchase was my first from a car dealership. I had always purchased used cars before this and bought direct from the owner. I was not knowledgeable about buying from a dealership so enlisted the help from a few friends in the industry.

I was able to buy through the fleet manager and did not have to bargain for the selling price. It was a set price and this felt easy. When I walked into the finance department I was totally ignorant to the process. This was actually a good thing!

Had I known anything beforehand, I may have given up the mission before I started this car purchase. Loan shopping? Hadn’t thought of that! Down payment?! I had never done that before.

In the past I either had paid cash or gotten a loan for the whole purchase from my credit union. I hadn’t saved any money before my quest for the car. Even if I sold my other BMW I wouldn’t have had enough for the down payment. Hmmm…

When I stepped into the finance office, I had already decided that car was mine.

So, I gave myself a day to come up with the down payment and loan strategy. It was so easy. I had nobody telling me to be aware of anything. I followed my gut.

When I checked in with my experts, they told me I was getting a good price on the car, and the loan from BMW beat my credit union’s interest rate and other reliable resources, too. WOW! That was a shock! What if someone told me to NEVER get a loan from the car dealer itself? I wouldn’t have even inquired about what their financing could offer me.

Ignorance was bliss. But notice I still did some homework while following my gut. I was checking in with my experts to see if I was missing any opportunities for an even better deal.

I got the best deal on the first try.

How many times do we question something that we nail on the first try? We tell ourselves, “That was too easy! We should keep checking.” Then we end up coming back around to the first choice.

I urge you to filter information that comes to you. Look at who the source is. Is it someone you respect and who has similar values? Is their situation the same? What kind of filters and experience are they speaking from? Does the information make you feel more powerful or does it make you cringe? You are your own best authority on what will work best for you in this moment. Follow your bliss.