Before kids, I spent two fabulous weeks in Venezuela. My time spent there was not without challenge, but it was still a great time. I thought you’d all enjoy the sometimes comical ways the Universe served up exactly what I was focused on. I’ve broken down the lessons of that trip into 6 nuances that make a huge difference when you leverage the Law of Attraction.

Lesson 1: Throw the desire out there, then let it go.

There were several things I knew I wanted to do in Venezuela, and I set my intention. These were the top desires: small plane or helicopter tour, ultralight plane ride, dolphin watching or swimming with dolphins, connection with my family, relaxation in the sun on the beach, good food, to communicate effectively with the locals, and fun, fun, fun.

Which were the two I wanted most? The ultralight plane ride and dolphins. Which was the one I was most attached to? Dolphins! I wanted it so badly to happen, I was definitely doubting that it’d happen. I was attached and not in allowing mode. I had the same thinking when I took a cruise to Alaska a couple years back. Did I see dolphins? Not a one. Argh!

I did get my plane ride. I stumbled upon that desire while at the beach. In fact, I had completely forgotten that it was on my agenda, and it happened the last day on Margarita Island. We literally saw the plane fly over the beach and asked a waiter where we were dining to hook us up. I hadn’t seen an ultralight the whole week until that moment. My desire unfolded effortlessly and was one of the highlights of the trip! 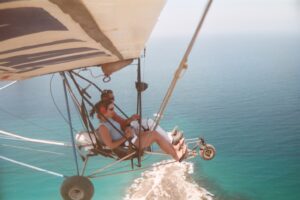 Lesson 2: There is always a way to make it happen. Ask for help.

The black market is big time in Venezuela. If you want a good exchange rate on your US dollars, don’t go to the bank. Ask and you shall receive. Even in the jungle where banks are nonexistent, we simply kept asking who could get us a better exchange rate. We were led to the best deal of all simply by asking.

There were many village people who told us that our request was not possible.

I kept my eye on the goal, and the person who ended up exchanging our money was the market owner we’d spoken to several times over the week who we’d never thought to ask.

At the time of our visit, President Chavez of Venezuela did not like President George Bush. My father had called me several times before my vacation to suggest I not go, as he felt it may not be safe for an American there. I felt it was fine and we asked several people, as well as our travel agent who lives there, for their input. They all assured us we’d be fine.

There happened to be a huge political struggle while we were there that caused demonstrations in Caracas.

Guess where we were during all of it? The jungle. It never impacted us. I had felt no signs of uneasiness about our trip, except I had felt strongly about not spending any unnecessary time in Caracas. My inner guidance was right on track.

Lesson 4: Take actions from abundance versus lack.
Lesson 5: Ask and it will be given.

Our travel agent, Peter, happened to live in Venezuela, and we went salsa dancing with him at the beginning of our vacation. During a casual conversation, he was telling us about a cave in the jungle that had recently been discovered. The opening of the huge cave was graced by a spectacular waterfall, and a scientist had found a unique species of frogs there. He teased our love of adventure with the fact that you could fly a helicopter into the cave. In fact, it was the only way to get there.

“Um, excuse me. Can you get a helicopter for us to fly there?!”

Peter immediately got excited. He’d never been to it (actually no tourists had ever really been there) and said if he could arrange the trip, he’d like to join us. It happened. The cost per person for this 3-hour ride was the same as the cost for all my lodging and flights between the island and mainland for the two-week trip! I was a bit hesitant but decided that it sounded so amazing and I’d attract more abundance from saying YES! Bar none, it was the best thing we did on our trip. Bonus: My first day back in the office I got two new wonderful clients, which covered the expense of the trip. 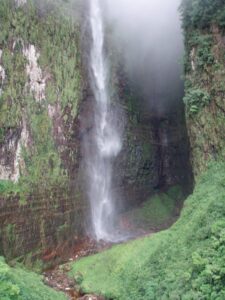 Lesson 6: Focus on the essence of what you want and the Universe will surprise and delight you.

When I went on the trip, I had a small dog who usually got babysat by my mom or my neighbor who came to my house once a day to feed her. My mom was on my vacation with me, so that dog-sitting option was gone. My sweet neighbor would’ve fed Roxie while I was gone, but on a two-week vacation, I prefer she stays with someone. When I left, I did not have the most ideal arrangements for the second weekend of vacation but relaxed about it and just intended that she’d be comfortable and get enough attention to pass her over.

On day 7 of my vacation I had a short conversation with my BFF’s mate, who informed me that Roxie was going home with him for the weekend. Excellent! That was three extra days of consistent company for her that I hadn’t expected! I felt elated! Upon my arrival at the San Francisco airport on day 15, Eva and Robin drove up with Roxie in the front seat. They’d liked Roxie’s company so much, they kept her for a whole week. She walked the marina with Eva every day. She was spoiled with Cornish game hen, baths, blow dries, and more (I don’t know if this was a good or bad thing. 😉 The next couple of days I was sent photos and movies of Roxie’s visit to Eva and Robin’s place. They fell in love with her and eventually got their own small dog as a result! 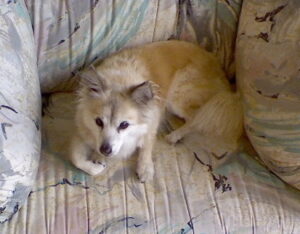 Adonata Pyaga
I love your story and your energy! Yes, we can navigate with safety and fun even when there is uncertainty at large in the world around us. Shine on!